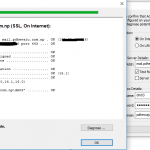 On my previous blog, I have mentioned that how we can generate the Exchange online Protection (EOP) report to analysis the statics of our Organization Email services. But during the configuration, there has been issue with the product Microsoft Excel 2016. Any admin using Office 2016 or Office 365 are not able to install the
Read More

Exchange online Protection (EOP) has been one of the most efficient product for the spam/malware filtering. Most of the organization which do have Exchange server or any other mail server has been using EOP as SMTP gateway to receive or send email. And a lot of email has been protected with it and for the
Read More

Optimum utilization of resource has been major concern of today’s infrastructure. Where it be on the Hardware level or in Software level, moreover virtualization has been commonly adopted technology worldwide. Whether it be VMware or Hyper-V every IT Admin wants an efficient virtualization technology for the better performance and ROI of their resource. On this
Read More

Security has been major concern these days. Mostly with the identity theft. If we check our public email or social media identity, we have made it secure with the second factor of authentication like SMS or Phone call alert. If our personal things are so important than it’s it our Official document are also of
Read More

As we know that last week has been quite messy due to of Ransomware name Cryware/wannacry. A lot of us were hassling up to update our machines with MS17-010 Patch. Looking the criticality nature, even Microsoft has released its patch for Windows XP and Windows Server 2003 which are EOL (End of Life) Product. But
Read More

On my previous blog, I have shared my knowledge on how wannacry/cryware Ransomware has been infecting the computers worldwide. This ransomware that spreads like a worm by leveraging vulnerabilities that have been previously fixed. While security updates are automatically applied in most computers, some users and enterprises may delay deployment of patches. While the attack
Read More

Since last Friday (May 12, 2017) there has been massive cyber-attack at Europe bring down a lot of computers from different organization including Schools and Hospitals. This has been major attack that none of has expected. Wannacry/cryware ransomware outbreak is having a major issue now.
Read More

When you have a uniform environment of it’s a new fresh infrastructure, it’s always great to be the part of implementation team. But is we need to implement same thing on existing environment, sometime it might be your worst nightmare. Here I am sharing same experience of mine with SFB 2015. Even though every configuration
Read More

Issue: Few day back, I was doing some testing on my Exchange 2016 installed on Windows Server 2016. I had an Active Directory server 2016 on my back-end to authenticate the Exchange Server. A moment ago, everything was running well and suddenly the mail-flow got stopped by prompting the error ‘Something went wrong and we
Read More