Here in this blog we are discussing about the Exchange Server 2016 Architecture, unlikely the older version of Exchange server, Exchange 2016 is quite different. As described on our previous blog, On Exchange 2016 Architecture has been modified and that Single BOX is accumulated with CAS, HUB Transport and Mailbox know as Mailbox Role and another Role is Edge Transport Role. So in Summary now we do have only Two major roles on Exchange 2016 and they are

Exchange Server 2016 uses a single Building block architecture that provides email services for deployment at all sizes, from small organization to the largest Multi-national corporations. This architecture is describing in the below diagram. 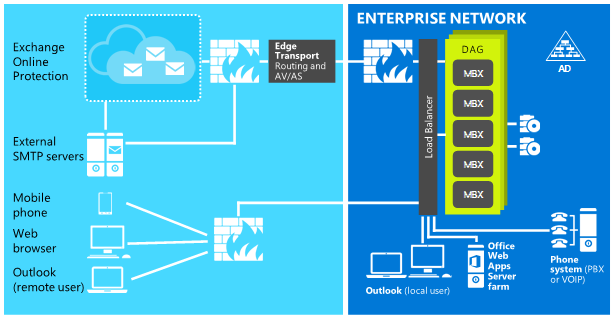 Protocol layer communication between Exchange 2016 servers is shown in the following diagram.

In case of Exchange 2016 we do have only TWO ROLES, whose architecture is defined below:

The another major factor that required for the salient deployment of Exchange 2016 is to know about its HA. How can we achieve HA for the different roles of Exchange 2016.

A database availability group (DAG) is the fundamental element of the high availability and site resilience framework that’s built into Exchange 2016. A DAG is a group of Mailbox servers that host a set of databases and provides automatic, database-level recovery from database, network, and server failures. And DAGs in Exchange 2016 have been improved compared to Exchange 2013. Although the configuration is same on the matter of Exchange 2013. Clients do not connect directly to MBX2016 back-end end points; connectivity is through client access services Evolution of E2010 DAG

For HA of mailbox, as of Exchange 2013 it supports only 16 mailboxes for DAG connectivity.